According to a research report published last Friday, Bank of America has downgraded Western Digital from Buy to Neutral, and lowered their target from $54 to $46. In the report, Bank of America said:

"WD reported significantly better than expected F3Q12 EPS at $2.52 vs. our/Street $1.60/1.55, driven by revenue and margin. WD guidance was disappointing (EPS of $2.35-2.55 vs. our/Street prior $2.67/2.30) and commentary pointed to softer demand than expected going forward, at current/elevated ASPs levels, and some pricing concessions (certain HGST customers, pre-acquisition). It appears the HDD industry can't have it both ways for much longer – pricing/margins at high levels, and expected strong demand, with assumed channel inventory refill. We step to the sidelines for now, despite attractive valuation."

Since many retail investors may have missed the conference call, this seems like a good opportunity to provide a breakdown of the Bank of America analysts’ comments which appear to have precipitated the sell-off in the shares on April 27, 2012.

This means Bank of America was off on their Q3 EPS estimates by approximately 38%.  That’s not a small number.  However to their credit, at least they are open to “true confession”.

In the last 15 quarters, WD has beaten estimates and their own guidance 12 times, that’s 80% of the time.  On average those 12 QTR’s beat analysts’ estimates by about 32% (or roughly the same figure as the B of A original est. missed actual in FQ3).  Also, if the analysts’ comments are read carefully, they guided lower than B of A’s estimates, which they have established in their own release as at least 38% inaccurate, yet they fail to point out that WDC’s guidance still beats the second figure (the streets) of $2.30, by as much as .25 cents (or greater than 10%).

In this instance a beat of 32% (the historical avg. based on 12 QTR’s) would mean Q4 earnings of $3.10 to $3.36 per share – this seems likely to happen next quarter (barring insurance payments being received).

If the higher EPS figure turns out to be right, then sometime in July of this year when the company next reports, the P/ (annualized) E will be a mere 2.9 (not including any insurance payments)

It’s amazing what you can do with first grade math 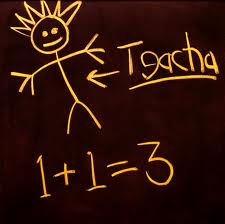 Now the current market cap is based on the shares outstanding in the most recent financials, however, those are reported (as must be the case when companies issue or take back share during a quarter) as an “average” outstanding during the quarter.  In this case the average figure is 241 M.

However, the actual shares outstanding at QTR end were not 241 M, but rather 269 M., meaning earnings would then be $659 M for the 4th fiscal QTR.

If the higher estimate (of an earnings beat) above is correct, than the number would be $877 M.

In the article Hard Drives, Floods, Monasteries and Investment Returns published last November the focus at least in part was Insurance proceeds.  However, investors may have forgotten about this, when considering what the company’s future earnings will look like.  AS written in the article:

“If we are wrong about the overview above and WDC is really adversely affected by the disaster, than at least we can fall back on the… insurance coverage – business continuity coverage as we understand it means loss of income, the assets and equipment and facilities are all… insured according to the Q1 2012 CC”

Wolfgang U. Nickl, the company’s CFO had the following to say in the Q3 CC about Insurance:

“During the quarter, we filed a significant claim for property damage, which is currently in the early stage of evaluation by our insurance carriers. We also expect to file business interruption and other claims.”

What could these figures possibly be?

First, in the nine months ending March 30th, the company spent about 214 M on “charges related to flooding”.

Any claim for “business interruption” would have to take into account the lost unit sales at the (possibly at elevated ASP’s) for at least 2 QTR’s.  Finding out what exactly this figure is, would be as simple as looking at the annualized run rate of unit sales for WDC prior to the flood, then adding up the lost unit sales in the last few QTR’s, based on the former trend.  The Insurance adjusters will likely do something basically like this in order to ascertain the value of a “business interruption” claim.

For our purposes we’ll use a conservative figure of 25 M unites of lost sales at an ASP of 68 (the most recent figure) or 1.7 B in lost revenue. At 16 pts. Net margin (most recent MRQ), the company would receive an insurance payment of $270 M for this aspect of the claim.

*Note: There are other aspects that would exist in the claim (personnel costs etc.), which are not included in this calculation – they are left out in the interest of being conservative, and in the event the unit x ASP figures above are too aggressive.

There is no way to know when these payments might be received, but whatever quarter they are received in, this number would have to be added to the company’s already very high earnings of at least $2.45 per share.

Are you sure that’s what they said?

Bank of America went on to say:

Does this reference the TAM?  Because the TAM is up as expected and very nearly at the same level as a year ago and growing as Coyne’s comments indicate:

“…we expect in the back of the year, we'll see typical quarter-over-quarter progression that tends to be in the 10% range [referring to TAM]. And that will translate into very substantially year-over-year increases…”

Also, Coyne spoke of demand at retail that couldn’t get met, and later in the call had this to say:

“…we forecast continuing TAM growth each quarter through the balance of the year. And then sustained growth in the industry as we move forward from there”

Where was it said on the Conference call that HGST’s LTA’s were in anyway a problem? As for “pricing concessions” the analyst appears to be slightly confused by a comment made by Richard Kugele of Needham & Company namely:

“… regarding your comments about Hitachi signing of a few LTAs at lower prices than March., can you give some quantification of just how far below and what markets might have been involved, and more importantly, your ability to perhaps prevent that type of decision-making in the future within the confines of the Chinese regulators?”

To which Mr. Coyne responded:

“… you kind of characterized; that, that might not have been a desirable action. I believe it is a highly desirable action to provide assurance of security or supply to customers and to be competitive in addressing market opportunity, thereby, increasing business with certain customers and securing that business into the future. So while the prices are lower in the June quarter than they were in the March quarter based on the total package offered to those customers, business is highly desirable and significantly accretive to the overall well-being of the business. So we're explaining the dynamics of the current market not indicating any kind of problem.”

That clarification seems clear, particularly as it relate to language such as “highly desirable”, “significantly accretive” and finally “…not indicating any kind of problem”.

And finally arriving at the following:

“It appears the HDD industry can't have it both ways for much longer – pricing/margins at high levels, and expected strong demand, with assumed channel inventory refill. We step to the sidelines for now, despite attractive valuation."

There is one small detail the analyst seems to be overlooking in his prediction about what the HDD industry can and cannot have, namely the consolidation form 8 to 2 concerns in recent years, or the creation of a veritable duopoly, with WDC by far the larger and more effective company.

Mobile content is proliferating in interesting and unexpected ways, and “The Cloud”, which increasingly stores that content, literally wouldn’t exist without HDD’s.   This fact alone makes Mr. Craig’s comments unseemly.  Western Digital, with its extraordinary innovation, operational excellence, and superior leadership appears well position to have precisely their “way”.

The fear that HDD prices will fall appears to be derived solely from Western Digital comments that capacity recovered faster than expected.

It is not clear were the “excessively cautious” part of the call took place, especially given the management quotes above.  Nonetheless investors and speculators apparently have become “fearful”, but it may not be because of the conference call so much as it is because of the Analysts “calls”.

The question for investors ought not to be “can the analyst see the future” (an impossibility), but rather, what is their “Investment Philosophy” (If they have one).  This is extremely important, because it will determine how they see value.  Needless to say, there are many different investment philosophies, and varying degrees of “ability” – and “philosophies”, like “abilities” are not all equal.

On Value and “Valuation”

The last comments of the report, specifically “…despite attractive valuation”, appears to show, that this analyst is at least not in the “value-investor” camp.  How is this known?  Because the stock is not an “attractive valuation” at all; it’s an insane valuation – but only a true value investor would notice the distinction, or care. Speculation invariably has a myopic preoccupation with one coefficient – namely that of the earnings, which makes the sales “trend” the only data which matters in determinations of “Attractive”.  However, the sales trend (the least knowable), is most subject to the upheavals of a volatile world.   Therefore Projecting trends into the future, is really nothing more than making a “guess”.  To talk about "value" but not actually care whatsoever about it, just doesn't seem right.

Are you sure about what you’re doing?

The mind has many ways of playing tricks on itself, such as the false reasoning that goes something like this “we shouldn’t buy any more shares, because the price, even after Friday’s sell-off has already gone up so much”.

It seems probable that many investors in WDC shares in the last six month may have been feeling precisely this way within the context of analysts’ comments.

If that is the case, the reasoning is a logical fallacy, that appeals more to the minds proclivity to try to discern trends, than to a rational assessment of verifiable information and data.

The central problem outlined above however, does not deal with information, but significantly what appears to be “misinformation”.

When reading the subject report(s), it was hard to avoid feeling a mix of excitement, disbelief, and recognition of superior clarity around the numbers, as well as absolute confidence in what we were about to do.

“..stepping to the side lines” really means “selling” and when you’re in the position of an analyst, encouraging others to do the same.

Despite the 50% (post sell-off) earned for investors since last November, we were plowing unprecedented amounts of investor capital into the shares late in the day April 27th and early Monday morning (starting in the mid 37’s).

Why?  Because it’s hard to win from “the side lines”.

Tagged under
Rate this item
(4 votes)