On January 5th, 2012 Amvona published the article American Greetings Corp. and the Triple “W”.  The thesis was comprised of two primary components:

a) The value and impact of the stock repurchases the company had made and would be making.
b) An appraisal of the real value of the company’s tangible assets.

The following is the price performance one year later of the two purchase made in the shares at the time.

As can be seen in Fig. 1, the shares out-performed the benchmark index by about 16%, or a factor of greater than 2x. However, the shares were not held for an entire year.  Instead the shares were sold on April 26th, 2012 in order to reallocate the capital.  The following was the actual return:

As can be seen in Fig. 2, the return in absolute terms was lower than if the investment had been held for one year, however the annualized return on the capital allocated to AM was between 56.8% and 60.3%, a substantially higher figure.  Indeed since these dollars were re-allocated to an even more profitable investment - the compounded figure eventually far exceeded the average annualized rate of ~58.6%

On July 25th, 2012 a close friend emailed the following after reading the Jan. 5th Amvona article on AM:

From: Omitted, Name [mailto:This email address is being protected from spambots. You need JavaScript enabled to view it.]

To: '[This email address is being protected from spambots. You need JavaScript enabled to view it.]'

Should I buy more of GLW ?

What about AM they announce repurchase?

The response was as follows:

GLW represents a healthy margin of safety and sound investment.

There is a possibility that current management may take AM private at the current rate of repurchases...

Do you have time to discuss further by phone?

Some two months later the following news was announced:

9:50 AM American Greetings (AM +18.9%) soars after the company receives a go-private offer from a group of investors that includes CEO Zev Weiss and COO Jeffrey Weiss. The company says it will form a committee to consider the group's offer to purchase shares at $17.18 a pop.

It might appear at first glance that given the comments  in the July 2012 email on the potential for a go private offer that the shares should have been held longer.  However, at the time the positions were being liquidated in order to plow as much capital as possible into shares of WDC, which was in rapid decline due to an extraordinary misunderstanding not only by analysts but the market at large.   The capital which had just compounded at roughly 60% (annualized) in the shares of AM was quickly reinvested in WDC – the capital then compounded at yet a far higher rate – the history of those trades can be followed at the Amvona articles tagged with the WDC ticker.

Book value at the time of the revised offer was ~$20.33 – a figure which understated real tangible value as outlined in the following excerpt:

"American Greetings, in their own GAAP’ish way books their assets at Cost, including their real estate. This becomes especially noteworthy when talking about a 105 year old company.

The undervaluation of the real estate on the balance sheet provides greater security than the casual observer may at first realize. ~9.1 mln. sq. feet of commercial space booked at 188 mln. as of FYE 2011 comes to about $20 per square foot. We are not sure on what planet open warehouse space (let alone office) could be built for less than $50 (land costs aside). If this conclusion is accurate than $188 mln. represents less than 40% of the potential value (and in all likelihood much less). So there may be more than $200 mln. in additional tangible value not represented on the balance sheet.

In rough figures $200 mln. in real estate (conservative), divided by 35 mln. shares (also conservative), is an additional ~$5.70 per share in missing tangible book value. If that was added to the current book value of $19.43 (which is also almost all tangible thanks to the 2009 write-down), than the real book value may be north of $25 making the actual P/B ratio much closer to .50 than the stated .65 – that is to say more than an adequate margin of safety or the proverbial 'dollar for .50 cents'."

The fact that the Weiss family had offered as much as $17.50 per share and that the company had a book value of at least $20.33 per share (and likely much more) created an unusual arbitrage opportunity.  The shares were trading in the ~16 range between mid-January and the close of market on March 28th, 2012, which seemed "inefficient" at best, because even if the go-private offer did not succeed the buyer of shares in that range was still left with tangible value that far exceeded the price, meaning that there was a considerable upside potential with virtually no downside risk from a balance sheet perspective.   Further the company continued to pay it's dividend, which at $16 per share yielded an already high 3.75%.

In addition to this, and as pointed out in the original Amvona article, the company continued to aggressively repurchase shares, again buttressing the stock price in the event the Weiss family offer failed.

On February 25th, 2013, the price of the shares was considerably higher than 2011-2012 purchases outlined above, but the shares outstanding had also fallen some 25% in the same time frame - yet with the Weiss offer the shares had a nearly guaranteed price – it is possible that others did not act on this clear arbitrage opportunity because they may not have fully appreciate the excessive security underlying the issue in the event the Weiss bid failed.

Between February 25th, 2013 and March 28th, 2013, a period of just over a month the shares were being repurchased.   By late Friday afternoon on March 28th, there was a push to acquire as many shares as possible before the close of market.  When the buying was done, the average price per share paid was $16.20 spanning five separate days of buying.

On Monday April 1st, 2013 the following was announced:

Monday, April 1, 11:01 AM American Greetings (AM +12%) soars after agreeing to be taken private at $18.20 per share by a group led the the Weiss family. The deal price is a 26.9% improvement over an original offer put together by the group last year

However, what was not mentioned in the headline is that there would also be one additional dividend payment of .15 cents per share in addition to the dividend owed to shareholders of record on March 25th.

By a strange twist of fate, part of the financing for the deal, a $240 million preferred stock investment, was provided by Koch Industries Inc., a family run business - that is to say it was effectively Koch family capital indirectly buying the shares from present holders at a premium.

In 2005 a large commercial real estate asset had been acquired from Bill Koch's real estate firm "Oxbow Realty", which eventually produced an extraordinary return, based on of all things, an apparent mis-calculation in the value of the asset by the seller (it was this transaction that became the basis for the comments in the original article cited above).  The enlarged capital from this transaction, liberated in 2009, would become seed capital in an investment operation, and indirectly part of the present transaction.  The eventual purchaser of the subject property, who also became a friend,  added capital to the adventure and therefore also became a beneficiary of the present arbitrage in the shares - a transaction executed solely on the margin of safety provided by the mis-calculated value of AM's commercial real estate.  What a small world it is indeed. 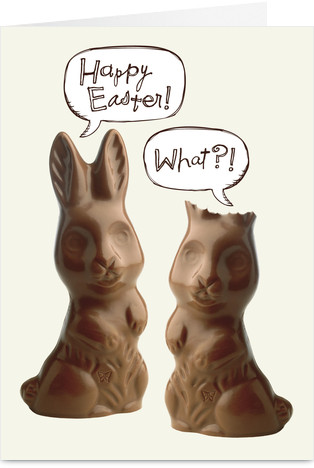 lthough the media would discuss both the business and the AM deal as being about greetings cards, AM as an investment, was actually about real estate.

It wouldn't be right if the list of recipients to receive Easter cards this year did not include the Koch brothers - needless to say Hallmark won't get the business.

Here is how the investments performed in the 2013 operation against the benchmark index:

Fig. 3
AM Investment Return 2013 (including dividends)

The $18.50 value is used for the price of AM for the first 4 transactions as the sum of the agreed offer of $18.20 plus two .15 cent dividends (one accrued on Mar. 25th and the other pending) - the initial dividend payment is deducted from the last purchase which took place after the initial ex-dividend date.

As can be seen above in Fig. 3, the average return of the five separate investments in the shares was 14% while the average annualized return was 425.7%.  While the present figures are not weighted, it should be pointed out that a significant amount of the buying was done under $16.10 per share.

Although the S & P 500 has done extraordinarily well in Q1, the investment still outperformed the benchmark by a large factor.

Special situations such as the above are extremely important to the preservation of capital in a rising market, because the price of the shares, and certainly the underlying value are almost entirely divorced from the vicissitudes of the market – a key to safety of principle if one believes the market may be overpriced as a whole.  As a small cap., undoubtedly AM was overlooked by larger fund managers, while retail investors may have only seen an outdated, and exceedingly boring business which on the surface appeared to be losing more money than it actually was.

It seems few saw a company with enough assets, even if sold in liquidation to cover all of its debts and the common, selling not only below book value, but indeed below the value of a buyout offer, given the close ties of the acquirer to the acquired, the offer seemed more likely to succeed than not - added to this is the original January 5th, 2012 Amvona article which explained the value of the underlying assets.

AM is the fourth investee (the other three being FRPT, TRLG [pending] and WINN) to be acquired or taken private in the last two years. That having been said, when contemplating the value of an original dollar invested in AM back in December of 2011, through its journey out of the shares, then through WDC, GLW, TRLG, WDC again and then back through AM – the compounded return over the ~14 months since the original AM investment would look more like fiction than securities analysis if published – despite the fact that all (but the WINN thesis, a situation where capital was again committed based on the value of underlying real estate assets) was published and explained on Amvona in detail.

Tagged under
Rate this item
(3 votes)

More in this category: « Apple’s Crime and Punishment The Short Case for World Wrestling Entertainment »

RT @OrthodoxStowe: #StKatherine today, following the #DivineLiturgy (Sunday of The #HolyCross) #Lord, save Your people and bless Your inhe…

RT @OrthodoxStowe: Through the intercessions of the noble bride of #Christ the godly Katherine, The #DivineLiturgy will be celebrated at #S…

RT @LemelsonCapital: "...some of The Fund’s highest rates of return were achieved on short positions, bearing out once again, that mgmt's p…
Follow amvona on Twitter